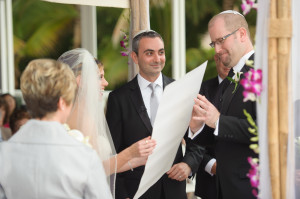 The modern Jewish wedding ceremony includes two ancient ceremonies that used to be separated by about a year — erusin (betrothal) and nissuin (wedding blessings).

Before the chuppah ceremony (the actual wedding ceremony) takes place there are a few matters to take care of. The first is the signing and witnessing of the civil marriage license (this is in accordance with the local civil law as mandated by the state or county).

Next, we have the ketubah (marriage contract) witnessed and signed by two Jewish witnesses who are not related to each other, or to either the bride or groom. The bride and groom have to agree the rules as outlined in the ketubah before the two witnesses can sign their names to the document.

Following this is the bedekken ceremony, in which the groom covers the bride’s face with a veil. This veiling represents a level of modesty that the couple will have in their marriage together. 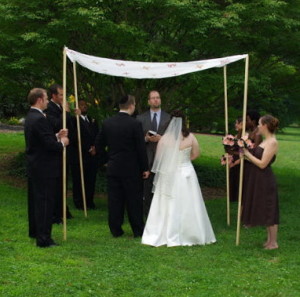 The marriage ceremony is conducted under a chuppah (marriage canopy), which symbolizes the new home that the bride and groom will create together. It is an option for the bride to circle the groom seven times as a symbol of her love, affection, and protection over her beloved.

The erusin (betrothal) section of the Jewish wedding ceremony involves two blessings, one over wine and the other reserving the couple for each other and forbidding them to have relationships with anyone else. This blessing reflects an earlier practice in which the bride and groom did not consummate their marriage until about a year after the formal betrothal when the bride moved into the groom’s home.

Next the groom performs the act that formalizes the marriage: He places the ring on the bride’s index finger and recites in Hebrew, “Behold, by this ring you are consecrated to me as my wife according to the laws of Moses and Israel.” In modern wedding ceremonies, the bride will also present a ring, along with the phrase Ani L’Dodi V’Dodi Li (אני לדודי ודודי לי) translated as “I am my beloved’s and my beloved is mine” from Song of Songs (Song of Solomon) in the Torah.

Rabbi Jason then reads the text of the ketubah and the groom presents it to his bride.

The nissuin ceremony includes the recitation of the seven wedding blessings, called the sheva berakhot, whose themes include the creation of the world and human beings, survival of the Jewish people, the couple’s joy and the raising of a family. Rabbi Jason will recite these seven blessings over a cup of wine from which the bride and groom will drink after the blessings. 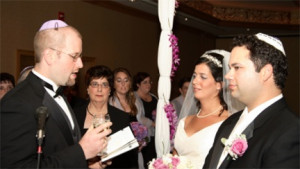 1. Praised are You, O Lord our God, King of the Universe, Creator of the fruit of the vine.

2. Praised are You, O Lord our God, King of the Universe, Who created all things for Your glory.

3. Praised are You, O Lord our God, King of the Universe, Creator of man.

5. May Zion rejoice as her children are restored to her in joy. Praised are You, O Lord, Who causes Zion to rejoice at her children’s return.

6. Grant perfect joy to these loving companions, as You did to the first man and woman in the Garden of Eden. Praised are You, O Lord, who grants the joy of bride and groom.

7. Praised are You, O Lord our God, King of the Universe, who created joy and gladness, bride and groom, mirth, song, delight and rejoicing, love and harmony, peace and companionship. O Lord our God, may there ever be heard in the cities of Judah and in the streets of Jerusalem voices of joy and gladness, voices of bride and groom, the jubilant voices of those joined in marriage under the bridal canopy, the voices of young people feasting and singing. Praised are You, O Lord, Who causes the groom to rejoice with his bride. 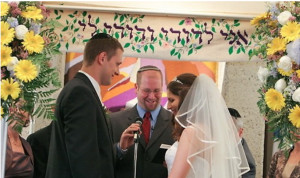 Rabbi Jason will then speak personally to the bride and groom. He will also read the letters they wrote to each other in the weeks leading up to the wedding.

The next and final ritual element of the ceremony is the shattering of a glass by the groom. The breaking of the glass reminds us that even at a joyous occasion such as a beautiful wedding ceremony, we still recall the destruction of the Temple that once stood in Jerusalem.

Immediately after the ceremony, the bride and groom adjourn to the yichud (seclusion) room, where they will spend a few minutes alone. This is the time for the bride and groom to share some private moments together — their first moments as husband and wife.